Anthony here. First I want to thank all of you for your prayers and genuine support during my bout with shingles. It was the strangest thing; it didn’t show up until I was on the plane. Blisters started forming on my right arm. Then it started–the pain throughout my arm, but even more, on my back and neck. It feels like I fell off of a ten-story building and landed on my back. Now my right arm is nearly covered in itchy lesions, from the top of the shoulder to the palm of my hand. I’m on a high dosage of ibuprofen, but it’s not helping, so I covet your prayers. That’s the only thing the doctor said he could prescribe. On a happier note, I’m in love with my new daughter. As Adeye said, there seems to be a lot of work ahead of us, but it’s still an absolute privilege from the Lord that we have her. You cannot imagine the joy she gives us. I intentionally stayed in the background the first few days to give Haven a chance to bond with her mom. Still, she let me touch her and even kiss her, but not pick her up. Then tonight, I played some music in our room and I saw she had a bit of groovin’ action in her body. So I got out of my chair and started dancing with her. She laughed and laughed as she danced with her dad. Then she reached out her hands the way she does to Adeye when she wants to be picked up. So I picked her up and she hugged me. It was a breakthrough. The picture you see is that very moment. Excuse the way I look. It looks like I’ve got the John McCain cheek goin’ on. 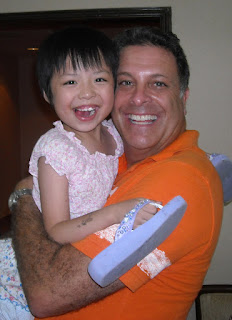 Hannah-Claire and Cade have been wonderful. But Cade misses his brothers. Sometimes, out of the blue, he says, “I want to go home.” “Home at the hotel?” we ask. “No, with Connor and Kellan.” But he’s much better when we do a webcam conference with the other boys. Cade loves it, and so do we. It was a brilliant idea Adeye had (besides marrying me). 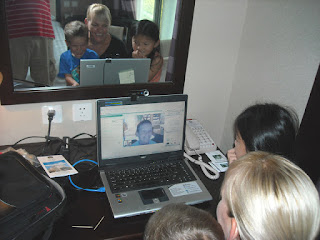 Here are some other memorable photos. To clarify some of them, you’ll see some big dried squid hanging. There’s also other things hanging that I’m not sure about. I could’ve sworn I saw some animal’s eyeballs in a bin. No, this wasn’t in a local street kiosk–it was in the Nanjing Wal-Mart! I dare Wal-Mart in the states to sell stuff like that. There was also live eels swimming in a tank that you take home and cook. Yum. 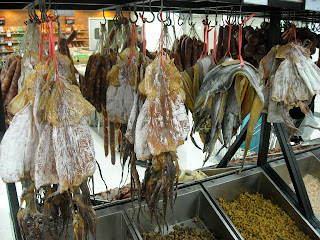 Here’s a photo of a street laundry. Looks cute, huh? Old men playing cards in front, waiting for customers. How quaint, right? Well those guys charged me the equivalent of $90 for a small load of wash! As I was pulling out the Chinese money, they were looking at me, snickering. Still, it was better than the hotel rate–$400 for the same small load!!!! At least SOME things are still cheaper in Colorado. 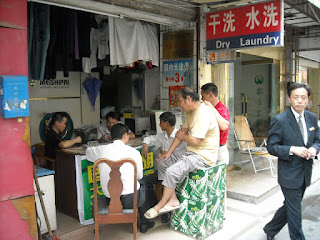 And finally, here’s one of my favorite shots of Cade at the hotel pool. He was mad about not going home again. Poor guy. You might want to pray for his heart to last another six nights until he sees his brothers again. 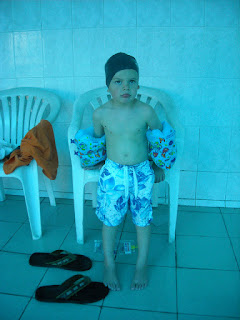 And here are the others. Enjoy. And thank you again! 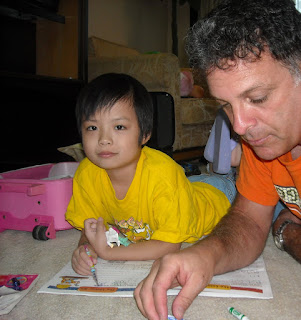 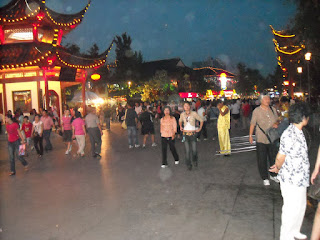 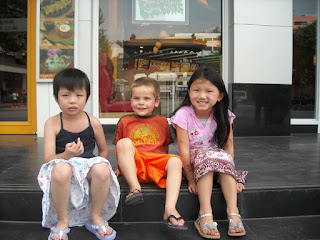 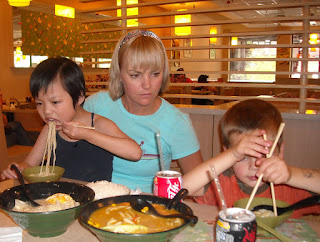