It is such a blessing for me to introduce you all to the Healy family.  I love their story of how the LORD has knit their family together.  We just never know the roads He will call each one of us to walk–but we can rest assured that they will be for our GOOD.

Mark and I have been married for 17 years. We met and married in the Seattle area and moved to Idaho 6 years ago. We adopted our oldest son, Matthew, in 1998. He is 14 now and a freshman in High School. A year after returning from Taiwan with Matthew, I gave birth to our daughter Nicole, she is 12 and in 7th grade. Two years later I gave birth again, Noah is 10 and in 4th grade. In 2009 we brought Margarita and Julia home from Ukraine. Margarita, 14 too, is in 8t grade and participating in an Online school this year. Julia is 13 and is repeating 6th grade at the same school as Nicole and Noah. I work full time as a student advisor at a for profit college and Mark is a Stay at Home Dad. 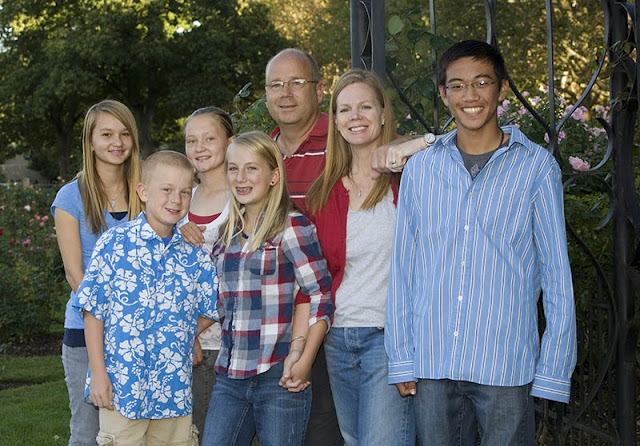 Mark and I married in 1994 and a year later decided to start a family. No such luck and off for fertility testing I went. Fertility tests are not that great and in my case provided no answers. At the end of the summer in 1997 my folks called one day and invited us to go to Taiwan with them for Christmas. My sister and family were living there in a sort of Missionary capacity at a Christian international school and the idea was to spend the holidays with them. I will never forget the day, shortly after accepting their invitation, when standing in the living room I said to Mark, “Do you want to adopt a baby while we’re there?”. He said yes.

I emailed my sister that Friday asking her what she knew about adoption in Taiwan and when I didn’t hear back from her right away, I called her the following Monday. Tuesday morning I received an email from her saying that she knew a Missionary man in Taiwan who had his own orphanage and while he didn’t have any babies available at the time, he would call around the island and see if anyone else did. Thursday night our phone rang and when I answered I heard my sister say, “It’s a boy!”. The Missionary had contacted an orphanage down in the southern part of the country, they had a baby available so he told them we wanted him. The next week my sister and family brought him home from the orphanage to care for him until I could get there. It took 6 weeks to get the homestudy, fingerprints and whatnot done, and I left for Taiwan the end of October, 1997.

Being that my sister was living at a school (more like a compound, in a good way…) I was able to rent a “cottage” from the Southern Baptist Mission and Matthew and I were able to live together for the next weeks and months that followed. We did our adoption completely backwards. Most of the time all the paperwork is completed, submitted to the country of adoption, approvals are granted AND THEN you travel. It was Thanksgiving before our homestudy arrived from the States, it still had to be translated and submitted to the court.

Thanksgiving came and went, Christmas with our family came and went, and still our adoption was not done. Each afternoon after lunch I loaded Matthew up in the stroller and we walked around the village where we lived. I *learned* enough Chinese to order a yummy “chocolate milk tea” or “passionfruit and green tea”, order shrimp “well done” from the Tepanyaki restaurant or get back to “the American school” when I got lost. I figured out I could buy Skippy peanutbutter at the 7-11 and quickly discovered that it was eggs soaking in black tea in crockpots that provided that *certain smell* in a lot of food stores. I could get whatever I needed by walking. I totally loved how the villages were sort of complete within themselves. I was even able to walk down the street one day and come home with a spaceheater under my arm. 🙂

On March 23, 1998 we finally arrived back in the States with Matthew. He turned one on May 4th.

So, fast forward several years. Matthew was 11, Nicole was just about 9 and Noah was 6.5. Nicole really wanted an older sister. I told her I was sorry but it just didn’t work that way. And then one day I was sitting in the living room with Mark and said, “Do you ever think about adopting again? It’s been on my mind”. He replied that he would be interested if the opportunity ever came up.

A week or two later I received an email from a friend who was forwarding an email from her friend. The email was about 3 orphan girls coming to our town from Ukraine for the summer. The email was asking for clothes and toy donations. And PS, the girls were all available for adoption. Pictures were included and I clicked on the one of the 2 biological sisters. I instantly knew this was it. I was traveling with my job at the time and so forwarded the email back home to Mark.

Once I was home and we talked about it, we decided to pursue adopting those 2 girls. On June 28, 2008, which was Nicole’s 9th birthday, we met the two girls for the first time who were to become her older sisters. Julia turned 10 that summer and Margarita turned 11. We were so fortunate to get to spend a lot to time with the girls over the summer. We started our homestudy in July. The girls went back to Ukraine at the end of August. We received our Adoption Department date in Ukraine for the end of November and traveled on Mark’s birthday, which that year was the day before Thanksgiving.

We stayed in Ukraine for a month and were not able to complete the adoption during that first trip (and that is another story in and of it’s self…) and so packed up and returned to the states on December 23, 2008. We received a court date for the end of January and took off again. All went well during the second trip and the girls landed on US soil on February 15, 2009 and instantly became US Citizens.

Those first few weeks and months were interesting. They didn’t speak much, if any English, and we didn’t speak any Russian. Thank the good Lord for translation books! Between those books and the ability to pantomime, it wasn’t too bad. 🙂 I had given myself a year for a new *normal* to settle in, and one day I realized we were there, and it had only been 7 months. The day I heard Julia and Margarita fighting in English, I knew we had arrived.

It’s been just over two and a half years now since the girls joined our family. Has it been easy? Not always. Has it been harder than I thought? Sometimes. Was I prepared to take over the job of parenting two preteens who had spent almost their entire lives living in an orphange in a poor Eastern European country? No. Was I equipped to handle raising 5 kids with the 4 oldest being just 2 years apart? No. But “God can do anything, you know—far more than you could ever imagine or guess or request in your wildest dreams! He does it not by pushing us around but by working within us, his Spirit deeply and gently within us”. (Ephesians 3:20 – The Message)

amazing news »
« He writes the story of my life