A few weeks ago I shared Hannah-Claire’s adoption testimony in two parts here and here.  There I wrote about how the Lord led and guided Anthony and me down the adoption road.  Since those posts, many have written and asked me about hearing the voice of the Lord.  Anthony had already written this a while back, so I thought I would share it with you.

Yes, God absolutely does speak to His church today!

We’ll offer TWO of you an opportunity to win a copy of an amazing book on this subject by one of our favorite authors.  Giveaway at the end of the post.

When I got lost at the State Fair of Texas when I was six, I was petrified. A mass of grown-up legs pressed against me as I strained to hear my father’s voice among a symphony of random other voices.

I used to feel this same frustration (and sometimes even panic) when I couldn’t pinpoint my heavenly Father’s voice in my early Christian years. I don’t even know what I was listening for. And would I recognize it when I heard it?

I was terrified at the prospect of being one of those whom Jesus does not “know,” as He says in John 10:27: “My sheep listen to my voice; I know them, and they follow me.”

And if by chance I COULD hear His voice, was I truly following Him?

But over the years, I’ve at least learned to calm down and trust that if my heart is truly seeking God, He’ll show up, somehow, somewhere, sometime.

Let me be clear. I am NOT an expert on hearing God’s voice. When I list ways to hear God’s voice, it is a mixture of what I learned in seminary with what I’ve experienced in life. I would LOVE it if God spoke to me as He spoke to Moses—as a friend, face to face. But He had an express purpose in speaking more directly with our forefathers. And besides, God loves it when I am stretched, straining to hear His voice among the symphony of other voices.

We have a cool, framed art piece on our wall with these words on it:

These very words were found scrawled on the wall of a cellar where Jews hid during World War II in Cologne, Germany.  God is looking for our belief, even if we NEVER hear His voice. Ever.

And that leads me to the first way God can speak to us:

You know that brick wall we hit in our prayer? Instead of seeing that as sign that God is insensitive, see it as a way He trusts you.  If we start with the premise that God loves us with reckless abandon, then when He’s silent, we HAVE to believe He’s up to something. And it’s for our good. Many times during our hard times the past few years, I’ve wondered why God hasn’t spoken to me. But He was telling me to not do anything. Don’t jump ahead of Him. In retrospect, I’m so thankful He did that!

This is the most obvious place to hear the voice of God. Psalm 119:105 says, “Your word is a lamp to my feet and a light for my path.” And Verse 133: “Direct my footsteps according to your word.” The Holy Spirit often directs us to a passage that seems to jump right off the page when we read it. I’ll often start by asking the Lord to speak to me through His word. Then I’ll start reading—anywhere—and before long, I’ve ended up on bunny trails, a wonderful journey in the Word that often ends up where He wants to speak to me. Because God’s word is “living and active” (Heb. 4:12), God may use a passage I’ve read a thousand times before without sensing anything, but this time, Wham!  He wants to use it to speak to me.

1 Corinthians 12 and 14 are very clear about spiritual gifts given by the Holy Spirit as He wills.
When I was a brand new Christian, my girlfriend at the time was grieving over the death of her cat. In her car, I started to feel like God was trying to tell me something to tell her. I spoke what I thought God was saying.  Immediately she started crying and explained that what I told her was verbatim what God had shown her in dream a few years back, that He was carrying her under His wings. And this was before I knew the Bible mentioned that we could be under God’s “wings”!

God has a sense of humor. Sometimes if I’m too thick to hear his voice in other ways, He’ll get His message across in my everyday happenstances. If I’m wondering if He wants me to do a mission trip to Italy, for example, He may have a friend out of the blue ask if I’ve ever been to Italy. Another day, I may drive past a billboard advertising a vacation to Italy. Later I might hear an interview on the radio with an Italian man. This is more than serendipitous. This is God.

Though I don’t believe every dream is a message from God, I do believe He often uses dreams to speak to us. And personally, I think He does that when we aren’t listening to Him in our waking hours. For example, I was really concerned for a friend of mine, that she was not walking with God. I poured out my heart to God. But I went overboard. I actually wanted God to change her. To zap her into common sense. But I wasn’t listening. Then one night, as clear as day, Jesus appeared to me so powerfully in a dream. I saw him standing in front me and very loudly, but lovingly, saying, “Anthony, YOU follow me.” His voice was so loud and the dream so real, that I woke up and looked around my room.

As for visions, it’s like watching a movie. Your eyes are open, and your world around you is like you were transported into a movie scene. This should not seem so incredible. Read Joel 2:28.

When it’s not from His Word, this is how God speaks to me the most.  Well, you say, how can you trust that your thoughts are from God, as opposed to the devil or your own flesh?  The honest answer is, I can’t always.  But over the years I’ve learned to trust what is and what isn’t from God.  Sometimes He’ll tell me things that seem to come out of nowhere.  So I’ll explore those things, test them, to see if they were from God. Other times, God will give me thoughts and I have a sense that I know that I know that I know they’re from Him. This stuff can’t be taught.  It’s from God.

I touched on this under “Circumstances.”  Have you ever been in a conversation or overheard one where the person is saying something that you just know is from God?  And they don’t even have to say “Thus saith the Lord!”  This might come in the form of one sentence.  It could come as a long conversation.  Or it can come as a long sermon from your pastor. Have you ever heard your pastor preach and think, Now that message was tailor-made just for me!  It may have been just that, from the heart of God.

Proverbs 1:5 says, “A man of understanding will acquire wise counsel.”  Understanding what?  What God is wanting to tell you.  We all need to identify a select few whom we trust hear from God and who will commit to pray on your behalf for any guidance so that God will speak to you through them.  And I might add, why do we always identify someone outside of our immediate family, namely, our spouses?  A lot of men have wise counsel lying next to them every night and don’t even realize it.

8. PUTTING OUT A FLEECE.

Sometimes today, when we earnestly seek God’s voice in a matter, we may “put out a fleece” too. For example, if I wasn’t sure that God wanted me to go back to work in a particular field, I may tell the Lord I’m sending out a lot of resumes, and if there’s someone really interested, I’ll take that as a sign from you that I should take it.

I would warn you, however, that we need to practice this discriminately because it could become a way we try to manipulate what we feel is God’s will for our lives.  For example, an extreme case is–I’ll put our house on the market and if it doesn’t sell in one month, then that’s a sign God doesn’t want us to sell it, when actually, God may want us to keep it on the market for a long time for a greater purpose.

9. THROUGH AN AUDIBLE VOICE.

I guess you can interpret my dream I had of Jesus’ loud words as an “audible” voice.  But a more clear example is when I lived in Munich, Germany.  I was asking God whether or not I should go behind the Iron Curtain at the time on a short mission in Czechoslovakia.  While on my knees in my living room, I heard a very loud, very audible, “GO!”  It rattled me so much, I walked around the house to make sure a stranger wasn’t there.

Paul says in Colossians 3:15, “Let the peace of Christ rule in your hearts.”  Many times when I need to know what God is saying in a particular circumstance or when I’m about to make a major decision on something, if I sense the peace of Christ is not in it, then I won’t budge.  Similarly, I let the “disturbance” of God speak to me.  Often God will warn me not to enter a situation by disturbing my spirit—that sinking feeling like I’m about to do something I shouldn’t do, even if there’s no real explanation for it.  We should never be afraid or ashamed to back out of a situation we might have committed to if we sense that God is telling us it’s not right.

And there we have it.  This is by no means exhaustive.  But I’m exhausted.  Hope you aren’t by now!

~~~~~~~
We have such a long way to go in hearing His still, small voice daily in our lives.  Some days we get it right–others we miss it completely.  God is so patient and tender with His children as we learn and grow.

Want to know more about hearing the voice of the Lord?

Dr. Jack Deere has written two amazing books on the power of God.  We love the way he shares his heart and God’s Word.

We’d love to offer TWO of you an opportunity to win this book…. 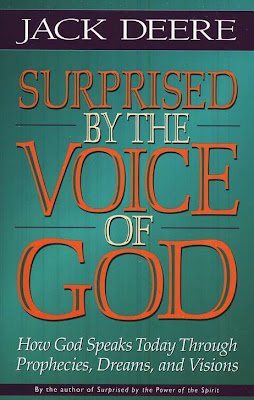 ﻿
Just leave a comment to enter.  You’ll have until midnight on Friday.

muddy-licious »
« now I lay me down to sleep