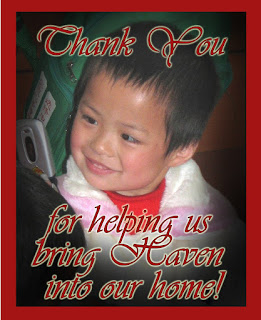 So many new friends have asked me how we found Haven. Here is a newsletter I wrote for our ministry.

I have come to the conclusion that life in the Lord makes no sense at all sometimes (actually, it feels like most times for me!). Just when I have life all figured out and everything is planned according to the way I want things to be—yes, I do like being organized—the Lord gently reminds me that I am not the one steering the ship. He and He alone determines the course for my life.

For years I have longed with all my heart to know what it means to truly surrender my life to the Lord. I have longed to live a life of complete abandonment to His will, not mine. Well, this has certainly been the year the Lord has asked me to do that. With homeschooling our four children, ages three through eight, my life is certainly not boring or uneventful. In fact, “free time” for me is a quick run to the grocery store without children. Still, the Lord brought a little girl across our paths last August whom, before the foundation of the world, He had destined to be part of our family.

Our journey actually began twenty months ago. One little girl on a waiting child website caught my attention. She had the most angelic face and just pulled at my heart. I could not understand it.

Soon after this, we left for South Africa and, upon returning to the U.S. three months later,  the little one was still waiting on a waiting-child web site. Five months after that, I noticed an urgent appeal by the adoption agency for this child. She needed to find a family in just two weeks, or her information would be returned to China and she would be unadoptable for the rest of her life. The Chinese government felt she had had enough time to find a home in America; they demanded her file be returned. Our hearts broke! How could it be that this little girl could not find a home? We called the adoption agency that had her information because we had to know why.

Her story is heart wrenching. The agency told us she had been waiting more than two years to find a family. That in itself is amazing. Generally the Chinese government only allows an adoption agency a few months to find families for their orphan children, after which time they are never given another chance. They are destined to a life in a Chinese orphanage, on the street, or in a sweat shop. Many of these children have special needs that could be so easily be taken care of in this country, but sadly, many never have the opportunity.

It turns out that the little girl who had captured our hearts was adopted in July 2006. An American family did all the necessary paperwork and traveled to China to pick up their daughter. What an amazing time that must have been for her, knowing that at six, she finally had a family. Sadly, that dream was cut short.

Soon after getting their daughter, the family realized that something was “not right” with her. She was non-verbal, showed symptoms of being very withdrawn, and threw tantrums.  She was very delayed.

They took her to a state-run Chinese hospital for evaluation. After some very basic tests, doctors diagnosed her with autism. The family felt that it was more than they could handle. After just four days of having her, they disrupted the adoption and returned her to the orphanage! We have since heard from a caretaker that she took it very, very hard. First abandoned by her biological mother when she was five months old, then having a family for just a few days, only to have that come to an end all too soon.

On hearing this, I wept. Many other families asked about her after this incident, but as soon as they heard the word “autism,” they said no thanks! Both of our hearts broke, knowing exactly what the future of a child diagnosed with “mental issues” held in China. When old enough, she would be put to work in a factory, making toys or something similar. Oh, God, in heaven!

We knew from the Lord that we had to do something to help. But what? We knew we couldn’t possibly adopt from China again. They recently implemented new, rigid restrictions on adoptive parents. Many of their specifications we did not meet, especially the financial requirement. We also knew that China did not bend their rules, as we’ve learned from other families who were turned down.

As we hung up the phone that day, I literally cried out to the Lord for this sweet girl. I came up with every reason why we could not consider another adoption: We really do not earn enough money, Lord; We can barely make it month to month; Our family is big already; We have just moved to a new place and are trying to get settled; How on earth are we going to put all these kids through college? Can I even consider trying to homeschool another child? Can I really handle an autistic child? On and on I went with the Lord. Oh, God, send someone else to do this.

Then a voice from heaven spoke to my heart: “Stop being like Moses, Adeye. Stop making excuses! Have you not been seeking to abandon your will to me? As I gave Moses the words to speak, so I will lead and guide you and Anthony in this. Trust me!”

God led me to Exodus 4:10-13: Moses said to the LORD, “O Lord, I have never been eloquent, neither in the past nor since you have spoken to your servant. I am slow of speech and tongue.”
The LORD said to him, “Who gave man his mouth? Who makes him deaf or mute? Who gives him sight or makes him blind? Is it not I, the LORD? Now go; I will help you speak and will teach you what to say.” But Moses said, “O Lord, please send someone else to do it.”

I knew we needed to do whatever it took to bring this lovie home and allow God to either open or close the door. He was calling us to surrender to Him. The following day I told the adoption agency we would do whatever it took to adopt her. I explained our circumstances and how we did not meet the Chinese requirements. They agreed to allow us to fill out some basic paperwork to submit to the Chinese government to see if they would approve us. The agency, too, knew it would take a miracle of God. On paper, things did not look good. A week later we got word…China would approve us!

It was a miracle!

And so, here we are, journeying in faith to bring a little seven-year-old girl home. She will soon be named Haven because the Lord told us she would need a “safe and sheltered place.” The Lord promised us that He will keep her safe under the shelter of His wings. We truly do not know what the future holds for Haven. The most recent update we received from the orphanage said that she was still not speaking, saying only one or two words to the caretaker to whom she feels close. We know that she does not interact and play with other children and prefers to play alone. She displays symptoms of frustration and anger. We know all these things. BUT, we know too that she is our child. We know that her Father in heaven promises her hope and a future, a bright and beautiful one.

We are so blessed and excited that when the Lord said “Go,” we heard the call and are going to get this special little girl. Even when, in the natural, it makes no sense at all.

I recently came across a quote by A.W Tozer that really ministered to us:  God is looking for people through whom He can do the impossible. What a pity we plan only the things we can do by ourselves. When I think of Haven and contemplate what lies ahead for our family, I realize that this is not something we can do by ourselves. It is truly impossible to do alone, but it totally is something we can do with the Father by our sides. What a burden lifted to know that we do not walk alone!
We are so excited to be adding Haven to our family. We cannot wait for the day when we can hold her in our arms and promise her, “You are part of our family forever; you will NEVER be abandoned again!”