If you’ve read my blog for a while, you’ll know that I am blessed with the most incredible husband.  If I could describe him in just a few words it would be a man after God’s own heart!

My man LOVES God.  Oh how he loves Him.

Anthony’s job is hard.  Not many can do it.  I certainly could not be a Hospice Chaplain.  But he does it so well, with excellence.  He gets so many people saved, which is what he lives to do.  In addition to loving patients and their families, walking them through grief, counseling them, and just being who he is in Christ to them…he does many, many funerals.

A couple of months ago, during a funeral, Anthony jokingly mentioned to a family member that the guy had great boots.  A few days later this family asked him to join them for lunch, which he did.  They told him how thankful they were for all he had done for their mom while she was so ill.  They proceeded to give him an envelope with a gift certificate inside.

Later I get this call from my dear hubby.

Anthony: “Um, honey, I got a gift certificate from one of my famlies.”

Me:  (Thinking a grocery or restuarant card, or something like that.)  That’s great, Hon.  What’s it for?

Me: (Thinking Target or Walmart–being the cheap skate that I am.)

Anthony: “No, it’s a gift card for a boot store.  The family knows the owner and told him to look out for me.  I HAVE to use all the money on boots.”

Seriously?  People really pay that amount of money for shoes?  That just amazes me.

Of course they had to be tailor-made to fit Anthony’s feet (I should hope so at that price).  He got them yesterday. These things come with a lifetime warranty.  Any little scuff mark, worn out heel or wear and tear will be fixed.  For free.  Bonus. 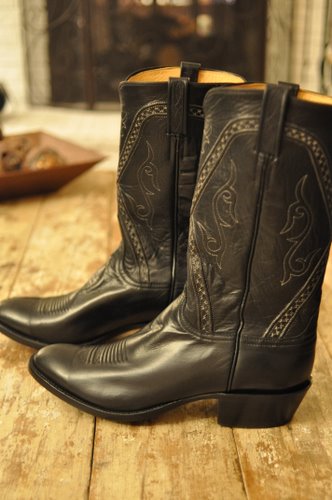 I love how God spoils His children in ways we never dream or imagine.

Did Anthony ever imagine he would own such an expensive pair of shoes?  Heck no.  Even as an international model he never spent that kind of money on himself.

I know there are probably a hundred other things that he would rather have used the $700 for.  But you know what?  When God chooses to bless us with lavish gifts and beautiful surprises, we have to receive them.   Our God is in the business of showering His children with His most glorious gifts–whether that be children, people in our lives, finances, possessions…or boots.  They’re all from the hand of our amazing Provider.

While we are absolutely NOT into material stuff, I am so thankful that God chose to bless the man in my life with a treat he never saw coming his way.

A wonderful gift for a faithful servant.

Who knew cowboy boots could cost as much as buying a car.  Not me.