We left Kharkiv on the train yesterday with Hailee and Harper’s passports in hand. Their ticket out of the country. Oh happy day. Today we spent the day in Kiev getting their visas for entry into the U.S. Tonight we’re exhausted! We got very little sleep after arriving so late last night. It has to be early to bed and early to rise (2:30 a.m.) for our flight home tomorrow. We can hardly wait to be reunited with our family at home.

The days have been long. Hailee continues to struggle to adjust. I would love to tell all of you that you were right in saying that Hailee was smiling in the last pics I posted, but she’s not. She grimaces in the sun, and actually winges.  We doubt if she’s EVER been outdoors in the five years of her life. There are times when we can get her to smile for us when we play with her, but it is never spontaneous. It is something that will come with time, we know.

We are so thankful for the gift that this precious little girl is. I have to keep things honest and real here on my blog–I cannot paint some fabulous picture of life being dandy all the time, because it just isn’t that way. That’s not reality. So, I’ll continue to share our triumphs, our joys, our sweet successes, and our hard times. The last few days would definitely fit into the latter category. It has not been easy with Hailee having such a hard time. She cries a lot and is easily traumatized. Anthony and I have had a pretty challenging time.

Our hearts break for her. It is hard to have a child struggle so painfully. This little girl knows nothing but the life inside a crib. Those four walls were her security. It is extremely traumatic for her to be out in the real world. The noise, the sights (including seeing masses of people) and the constant hustle and bustle are hard for her. Every time we move into a new environment, she has many meltdowns and it is almost impossible to console her. The stimulation is just too much. She hardly eats a thing, drinking is a problem, and she has had very little sleep in the last six days. All signs that she is struggling.

On Monday we ended up at a clinic, then, when they couldn’t help her, we immediately took her to a children’s hospital. We have been noticing that she seems to have digestive issues. It sounds like severe reflux. She makes constant gulping sounds–like she is trying with all of her little heart to swallow something, and it is awfully painful.  When she does that, she bows her head, grimaces, and her eyes roll to the side. The doctor confirmed our suspicion–there is something major going on in our little one’s tummy. Two enemas later and her insides were cleaned out. Unfortunately we have started to notice that things are getting bad once again. Her tummy is rock hard. It is going to be one of the first things we get checked out. This is a problem Hailee has lived with for years and years, and no one has ever cared enough to help her by getting to the root of it.

While at the hospital, they were asking some questions about her medical history, most of which we know nothing about. Her medical record is just a few lines long. We told them the name of the drug the orphanage had her on. They were horrified! Three doctors gathered in the tiny room and spoke in seriously fast Russian. We could tell that they were not happy. It seems that this drug, an anti-psychotic, is not suitable for children. And, they said, the first major side effect on the list is stomach issues.  But then again, why in the world should the orphanage care about side effects?  The only purpose of the drug was to make her sleep all day long.  When Anthony went back to the orphanage, the facilitator told the head doctor what the other doctors said, and he just shrugged and said, “Maybe, but it also could be that her new parents started a new diet.”  Which, by the way, we haven’t.

The reality of Hailee’s life is that she ended up in the wrong room.  There must be a point in an orphan’s life when they are either grouped with ‘healthy’ children, or are sentenced to life it that room–the one for children with severe needs.  To end up in that room is a death sentence, friends.  Literally.  There is nothing worth living for.  Physical touch is almost non-existent.  The only time the kids are touched is when they are changed or fed. And the five kids in there have only worn pajamas their entire life–boys sometimes wear pink, girls sometimes wear blue.  Who’s going to see if the color’s right, anyway?  They never leave their 4′ x 2′ crib, which is in a 10′ x 13′ room, with six cribs squashed together.

The only life they know is behind the bars of a crib.  In all my visiting, I have seen things happen in that room that my heart will never fully comprehend.  I have seen more than I ever wanted to see.  But, for some reason, the Lord needed me to see it with my own two eyes.  Why? I have no idea.

After doing some research we are convinced that Hailee is suffering from institutional autism. No doubt about it. It is very common for children who have experienced all of what Hailee has. They display many of the characteristics of clinical autism.  She deliberately hurts herself to numb the emotional pain, to distract herself through negative stimulation (which is better than none!).  She scratches behind her ears until they are raw, infected, and bleeding.  She makes constant grunting and groaning sounds.  She sits with her legs at a V and hands on her knees and rocks herself to comfort.  She cannot make eye contact.  She twitches and grinds her teeth so badly that there are merely stumps left in her mouth. She bangs her head on anything and everything until it hurts.  She hits herself all the time.

We keep a little hat on Hailee to prevent her from scratching the back of her ears. 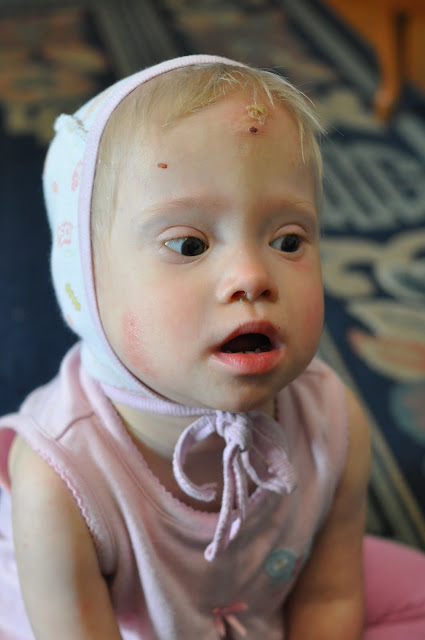 Still, in light of all of this…today we CELEBRATE! It is sweet Hailee’s fifth birthday. Today we rejoice that it is finished. Her old life is gone, and her new life has begun. Today we praise God that her life has been saved. Weighing only fifteen and a half pounds, there is absolutely no way that she would have continued to survive in an orphanage. No way! Hailee is the size of an infant. Truth be told, we are very surprised that she even survived this long in that place. 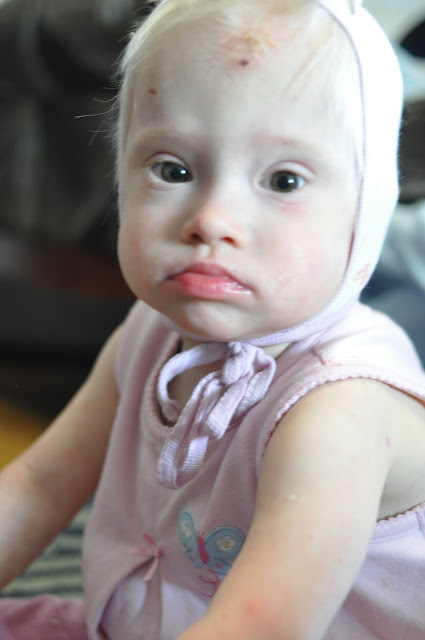 Tonight we are so thankful that the Father spared her life.  We know that the weeks and months ahead are not going to be easy.  We have always known that, even before we met Hailee in person.  But in this little angel we truly do see a diamond in the rough.  We know that she is going to learn and grow.  We know that she is going to learn to feel safe with us.  It is just going to take lots and lots of time, prayer, patience, and love.  Praise God that we have a lifetime to show her what it means to be loved and treasured.  We’re in no rush.  Unlike a broken toy, a broken child cannot be mended in a day, as so many of you who have been in our shoes know. It takes a very long time.

just a day in the park »
« home sweet home